As the coronavirus rages, scientists, reporters and others are taking a look back at another pandemic that rattled and roiled the globe: the 1918 Spanish flu.

McCloud, 103, was a toddler when she caught the disease, which (according to some estimates) killed as many as 100 million people worldwide.

Though McCloud has enjoyed a healthy life since, her 1918 survival did not come without repeated, agonizing screaming. She pulled through at the hands of a dedicated small-town doctor.

“He was determined that he was not going to let me die,” she says.

At their cores, COVID-19 and the Spanish flu are far different. For instance, though the coronavirus is particularly lethal to the elderly, the 1918 influenza targeted adults from 20 to 49, possibly because an earlier flu built up immunity among older people.

Furthermore, science was far more rudimentary then. There was no See LUCIANO, A9

Also, access to much global information was slow and purposefully limited in 1918. To avoid mass chaos and panic during World War I, Western powers and newspapers agreed to limit reporting on dire news, including a growing influenza outbreak. However, with Spain neutral in the war, all news there was fair game. Thus, newspapers filled column after column with news about the flu in Spain. Thus, though the disease did not originate there — theories abound regarding its starting point, including Kansas — the label “Spanish flu” became common.

The outbreak was prolific and deadly. Globally, 500 million people (a quarter of the planet’s population at the time) was infected. At best guess, the death count was 17 million to 50 million (but perhaps as many as 100 million), with 675,000 in America and 23,500 in Illinois. A count for central Illinois seems elusive, though in October 1918, soon after the disease hit downstate, 40 Peorians died.

Meanwhile, in Peoria and elsewhere, prevention was a precursor to today’s guidelines. In Peoria, the city ordered the closure of theaters, churches and most public gathering places, leaving just a few business to remain open.

“The city took on a vacant look as the disease spread along with the fear and isolation,” according to the Peoria Public Library.

The same scenario was playing out in Eureka. There, fear was racking the Pifer household, as was the Spanish flu.

In normal times, Lee Pifer ran a small eatery while his wife, Olivia, took care of their four children. But by late 1918, the Spanish flu had invaded Eureka, including the Pifer home.

One by one, family members became infected. The last victim was Anna, barely 2 years old.

More than a century later, she has no direct recollections of her toddler years. But her family later would share stories about the turmoil and pain caused by the Spanish flu, the same stories that McCloud and others pass down to their descendants.

In addition to the effort to isolate, Americans kept windows open to encourage circulation and fresh air. But the disease, even when not fatal, often took people down — sometimes literally, as with McCloud’s mother, the last one standing among the family. One day, she could no longer help the others.

“She finally gave up and had to crawl on her hands and knees to get to bed,” McCloud says. “She was so weak.”

A neighbor, Mrs. Van Dyke, helped care for the kids. But the biggest boost came from the town’s doctor, Frank Nickel. Amid other house calls, he tended to the Pifer family, with a special focus on its youngest member, who seemed the closest to succumbing to the disease.

With few options to aid the lass, Nickel relied on hot-and-cold hydrotherapy, then often used to fight the flu (and to this day cited as a home remedy). Each visit, he would ask Mrs. Van Dyke to boil water on the stove and pour it into a small tub, then fill another tub with cool water. Switching a patient between hot and cold water was intended to relieve the effects of flu.

First, the toddler would be dunked in the hot water.

“I would scream,” McCloud says.

Then, when she could hardly stand it further, the doctor would plop her into the cold water.

“I would scream even louder,” she says.

He didn’t blanch. Holding tightly to the struggling and screaming girl, he said, “If I don’t do this, she’s going to die. I’m not going to let her die.”

Plus, the entire family survived — and thrived. After graduating from Eureka High School, Anna Pifer met Delbert McCloud. They wed in 1938 and had one daughter, Sara. He died at age 75 in 1987; Sara Kauffman is 72 and lives in Eureka, where she marvels at her mom.

“It’s probably pretty unique for someone to live this long and actually had the flu,” she says.

It’s also remarkable that at age 103, Anna McCloud bustles about with an energetic helpfulness at the Apostolic Christian Home of Eureka. There, she’ll assist fellow residents (some much younger than her) with a push in their wheelchairs or a hand with a meal. Other times, she’ll help with care packages for local schoolkids and (before the coronavirus stay-at-home order) would make shopping excursions into town.

“She is a true joy to have in our facility,” says Holly Bauman, director of nursing at Apostolic Christian Home. “She enjoys socializing with the other residents and is a friend to all. I get a kick out of her spunkiness, and I am convinced that her humor and good nature have led to her longevity.”

Since age 2, McCloud has enjoyed good health. She believes her bout with the Spanish flu was a barometer of a long life ahead: Fighting off such a horrid disease was an indicator of a hardy constitution.

Still, as she readily admits, surviving the Spanish flu gives her no insight into fending off COVID-19. But, perhaps in deference to the doctoring she got as a tot, she urges people to follow experts’ precautions.

Meanwhile, she doesn’t fret over the coronavirus.

“No worry, just concern,” she says, then adds with a chuckle, “I’ll keep plugging along.” PHIL LUCIANO is a Journal Star columnist. He can be reached at pluciano@pjstar. com, facebook.com/philluciano and (309) 686-3155. Follow him on Twitter.com/LucianoPhil. 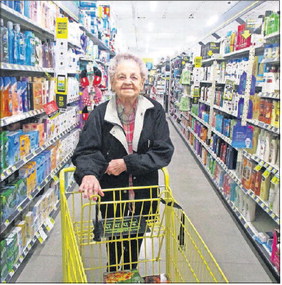 Anna McCloud, 103, shops in February at the Dollar General store in Eureka. As a 2-year-old in Eureka, she contracted the Spanish flu in 1918 but has enjoyed a healthy life since. She now lives at the Apostolic Christian Home of Eureka. [PHOTO PROVIDED]

This undated photo shows Anna McCloud during her days at Eureka High School in the early 1930s. [PHOTO PROVIDED]

Click here to see this page in the eEdition: